Catholic Kids and the Communion of Saints 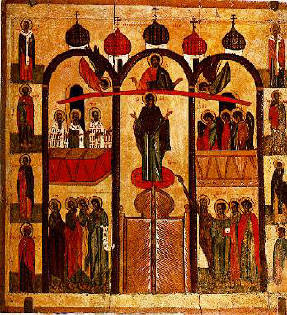 image source
My husband was not raised as a Catholic. He did not swim the Tiber until several years into our marriage, though he has always attended Mass and fully participated in our Catholic family life. Still, he continues to be amazed at things our children do and say. I just tell him, “That’s what Catholic kids do!” These moments of surprise often involve the Communion of Saints.

Most recently, my daughter who has only been driving herself solo for about a week, found herself driving the back roads of Northern Virginia in a snow storm. She had soccer practice at one of the fields located in the hinterlands. It is about a twenty-minute drive from home along winding, hilly, two-lane roads. We knew snow was in the forecast but it wasn’t snowing when she left and wasn’t predicted to start snowing until after practice was over. Wrong! The snow began soon after she left home. Committed soccer players that they are, however, the team kept practicing as scheduled. When it was time to leave they the found the roads snow covered and icy. She joined a caravan of folks trying to maneuver their way back to the main thoroughfare. It was slow going with much slipping and occasionally getting stuck. I guess at one point she really didn’t think she going to be able to stop and found herself reciting a litany of Hail Mary’s as well as invoking the intercession of “St. Monica(one of my favorites), St. Barbara (her favorite), St. Patrick (her boyfriend’s favorite), and whoever else is out there!” (I guess that is the hazard of the IM-ing generation. She was open to help from any saint who was “online”.) The car did stop. She ended up in front of a school friend’s home so she just invited herself in and hung out there until we could come rescue her. As she recounted the episode we laughed and my husband just shook his head as she explained her prayerful recourse to the saints.

My boys are certain that St. Monica keeps her eyes on them when I don’t. My second son was in high school and had hurriedly pulled together an English paper. As was his habit, he had waited until the last minute to work on the assignment. I knew he was working on the paper, but really didn’t pay too much attention, other than to give a proper scolding for procrastinating. A couple of weeks later I was returning from an errand and the thought just popped into my mind to ask my son about the paper. When he returned from school I asked him if he had gotten his English paper grade. His face turned white. He had gotten the paper back that very day. In fact, probably at the hour I had that thought he was getting it from his teacher. Let’s just say he got the grade he deserved for turning in little more than a first draft. There’s no keeping secrets from Mom with St. Monica around!

Just a couple of weeks ago when my oldest was home from college I asked him to finish putting away the groceries and fold the grocery bags while I did the next round of kid shuttling. He agreed. However, after I left he thought he would just play a little computer game before he got to his task. As he sat down to the computer, the power in the house went off. Since his game was unavailable he went ahead and took care the grocery chores. As he folded the last bag the power returned. St. Monica strikes again!

My youngest now has new respect for St. Lucy. He got contact lenses last fall and was having just a terrible learning to put them in. The frustration reduced him to tears which makes getting the contacts in even more difficult. I told him to take a break and ask St. Lucy to pray for him since she is the patron of eyes. He did and sure enough, the next try the contacts went in easily.

I am sure most of you can recount instances of saintly intercession. Sometimes these events are dramatic and momentous. Sometimes, they seem almost trivial. The saints have no power other than prayer. We ask for their intercession, not their intervention. I am so happy that my children share in the consolation I find from having the entire Church Triumphant ready to pray if I but ask. And unlike my kids’ IM buddies, the Communion of Saints is always “online”.

Christine the Soccer Mom said…
I have a good intercession story. I honestly hadn't asked the saints for prayers much before this happened, but since, I've made it more of a habit.

I have this little kitty cat toy that my mother got at her baby shower when she was pregnant with me. I still bring this kitty to any new place that I travel (which, yes, included my honeymoon). Before we moved to Virginia, Hubby was working for the same company he does now, but out of Florida. He had a two week trip to make, and instead of him flying back and forth on the weekend, my parents watched our children so I could spend a weekend alone with him in what eventually became the area we live in now. Naturally I brought the kitty cat.

Upon arriving home, I unpacked, but later on, I realized that I hadn't seen the kitty. I looked all over the place. Unfortunately, since kitty just sits on a shelf most of the time, it took me several months before I realized I didn't know exactly where she was. I searched under the bed in our room, all over the house...everywhere I could think of. Finally, I called the hotel and asked them what might have become of her.

"We hold items for a month, and if they aren't claimed, we either donate them or throw them away, depending on the condition of the item."

Needless to say, after hanging around for more than 30 years, kitty was not in good shape. I knew that if I'd left her in the hotel, she had been thrown in the garbage.

I thanked the woman and hung up. Sitting down in my husband's recliner, I started to cry. I was certain kitty had been thrown away. As a last ditch, I recalled that Saint Anthony is the patron saint of lost things and asked for his help.

As I finished the prayer, I glanced at the end of my bed, which was visible from the chair I was in. I saw something white sticking out from under the dust ruffle.

"How did I miss those socks when I was under there before?" I wondered, as I also wondered when Hubby would put socks in the hamper.

I walked into our room and bent down to pick up the socks, but it turned out that it wasn't a pair of socks. It was my kitty. Now I really cried, but this time with joy and thankfulness!

You know what? There have been hundreds of little moments like this (with and without saints' intercession) that prove to me that God cares even for the littlest worries of our lives.
January 23, 2007 at 5:23:00 PM EST

Popular posts from this blog

Find Catholic Mass even when Traveling

March 28, 2006
First published 1/27/06 There is no such thing as a travel dispensation. Even when you are away from your home parish, you are expected to take advantage of your Sunday opportunity to attend Mass. With most communities offering a Saturday evening vigil Mass as well as Sunday Mass, there is really no excuse for missing Mass while traveling unless you are backpacking beyond the reach of civilization. It takes just a little planning and effort on your part. The question is, “Do you really want to go to Mass?” Why should we worry about missing Mass while traveling? Well, the easy answer is “’Cause the Church says so!” Missing Mass is considered a serious sin. Jesus told Peter Whatever you bind on earth will be bound in heaven ( Mt 16:19 )so we must take the edicts of the Church quite seriously. Still, this is a child-like level of understanding. The more mature answer is we have a responsibility to maintain our relationship with God. Like any relationship, if it is neglected, it
1 comment
Read more

Dispelling the Myth of the Travel Dispensation

August 21, 2008
One of the fun things about having a site meter on my blog is I can see which posts garner the most attention. I can also see how people find my blog. One of the most read posts from my two years of blogging is this one that discusses finding Mass while traveling . I would like to think this post is so popular because it is so well written. The truth of the matter is that it generates so much traffic because I use the words “travel dispensation for Mass”—as in “There is no such thing as a travel dispensation for Mass.” I would guess that nearly a dozen times every week, someone googles “travel dispensation for Mass” and finds my blog. I wonder how many of these folks are poor souls trying to assuage their Catholic guilt with evidence of a justification for missing Mass while on the road. I know that when I tell my seventh grade CCD students that attending Mass every Sunday is a commandment (one of the top ten!) and not just a pretty good idea they are amazed. Missing Mass has become s
5 comments
Read more

January 23, 2009
I was there! Yesterday I gathered with hundreds of thousands— please note the mainstream media will only say scores, thousands, or even tens of thousands —to make a stand for the sanctity of life from conception to natural death. It was a joyous and uplifting event. Of course, the message of support from the President that we have enjoyed for the last eight years was missing. There were numerous members of Congress who joined us to make a stand. This is not a Catholic event. Orthodox Jews and many Protestants were there. But it was striking to see the Catholic clergy and religious. I was excited to see the number of young priests and sisters. Take a look at the Sisters for Life . These young women are vibrant, beautiful, and just exude holiness. I would be honored to have my daughter be among their number. I was also excited to meet up with my blogging buddy Rosemary . She was there with her three lovely daughters. You know, the Washington Post coverage devoted as much space to th
6 comments
Read more

I expect everyone to engage in respectful, reasoned, discussions. Act like an adult. For specifics about the blog commenting policy, go here.

Our Lady of Victory, Pray for Us

O, Victorious Lady, thou who hast ever such powerful influence with thy Divine Son in conquering the hardest of hearts, intercede for those for whom we pray, that their hearts being softened by the rays of Divine Grace, they may return to the unity of the True Faith, through Christ Our Lord, Amen.--Servant of God, Father Nelson Baker

My God, I offer You all my prayers, works, joys, and sufferings in union with the Sacred Heart of Jesus, for the intentions for which He pleads and offers Himself in the Holy Sacrifice of the Mass, in thanksgiving for Your favors, in reparation for my sins, and in humble supplication for my temporal and eternal welfare, for the needs of our holy Mother the Church, for the conversion of sinners, and for the relief of the poor souls in purgatory.