St. Alphonsus and the virtue of diligence 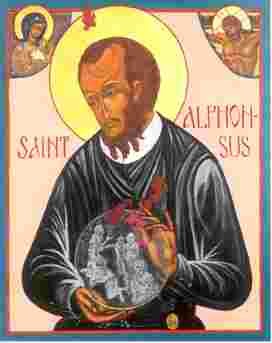 Today is the Memorial Feast of St. Alphonsus Liguori, founder of the Redemptorist Order of priests and brothers. St. Alphonsus was a prodigy who could master almost any subject placed before him. By the age of sixteen he was a lawyer. However, after ten years without losing a case he made a mistake and lost a significant legal dispute. He had an epiphany and realized that the accolades of men were meaningless compared to the Glory of God. He left the practice of law to become a priest. He was a prolific writer and was eventually declared a doctor of the Church.

Of course, many virtues can be attributed to this brilliant saint. However, the one that struck me today was diligence. St. Alphonsus Liguori could not stand the thought of a moment being wasted. Every free moment was put to good use praying, writing, reading, or teaching. I think I need a picture of St. Alphonsus to place near my computer as a reminder to think before I plug in. Am I being productive or am I just whiling away the minutes and hours on the mental chewing gum of the internet? Are my words adding to the Glory of God or are they just noise added to the cultural din?

St. Alphonsus Liguori is the patron of confessors, moral theologians, and lay apostolates. I think I might also invoke his intercession when I sit down to the computer that my time will be used productively and my work will serve God's will.

Popular posts from this blog

Find Catholic Mass even when Traveling

There is no such thing as a travel dispensation. Even when you are away from your home parish, you are expected to take advantage of your Sunday opportunity to attend Mass. With most communities offering a Saturday evening vigil Mass as well as Sunday Mass, there is really no excuse for missing Mass while traveling unless you are backpacking beyond the reach of civilization. It takes just a little planning and effort on your part. The question is, “Do you really want to go to Mass?”

Why should we worry about missing Mass while traveling? Well, the easy answer is “’Cause the Church says so!” Missing Mass is considered a serious sin. Jesus told Peter Whatever you bind on earth will be bound in heaven (Mt 16:19)so we must take the edicts of the Church quite seriously. Still, this is a child-like level of understanding. The more mature answer is we have a responsibility to maintain our relationship with God. Like any relationship, if it is neglected, it weaken…
1 comment
Read more

Dispelling the Myth of the Travel Dispensation

August 21, 2008
One of the fun things about having a site meter on my blog is I can see which posts garner the most attention. I can also see how people find my blog. One of the most read posts from my two years of blogging is this one that discusses finding Mass while traveling. I would like to think this post is so popular because it is so well written. The truth of the matter is that it generates so much traffic because I use the words “travel dispensation for Mass”—as in “There is no such thing as a travel dispensation for Mass.” I would guess that nearly a dozen times every week, someone googles “travel dispensation for Mass” and finds my blog. I wonder how many of these folks are poor souls trying to assuage their Catholic guilt with evidence of a justification for missing Mass while on the road.

I know that when I tell my seventh grade CCD students that attending Mass every Sunday is a commandment (one of the top ten!) and not just a pretty good idea they are amazed. Missing Mass has become so …
5 comments
Read more

Parent Letter from a Catechist

August 29, 2006
I am going to be teaching seventh grade CCD this year. We do most of the preparation for confirmation during this year since Confirmation is usually scheduled for the fall of the eighth grade year.I have composed a letter to the parents to try and keep them active in their children's religious education. I thought I would post it here and get your feedback before I send it out in a couple of weeks.

I am privileged to be your child’s seventh grade CCD teacher for the 2006-2007 school year. This is a very important year. We will focus on your child’s preparation for confirmation. Of course, you have already been preparing your child for this sacrament for many years. You are the primary catechist for your child. You show how important your Faith is by making Mass attendance a top priority and by family prayer.

Confirmation is one of the Sacraments of Initiation. It is a beginning. It is not a graduation. This year we will work to solidify the foundation of your child’s Catholic Faith.…
5 comments
Read more

I expect everyone to engage in respectful, reasoned, discussions. Act like an adult. For specifics about the blog commenting policy, go here.

Our Lady of Victory, Pray for Us

O, Victorious Lady, thou who hast ever such powerful influence with thy Divine Son in conquering the hardest of hearts, intercede for those for whom we pray, that their hearts being softened by the rays of Divine Grace, they may return to the unity of the True Faith, through Christ Our Lord, Amen.--Servant of God, Father Nelson Baker

My God, I offer You all my prayers, works, joys, and sufferings in union with the Sacred Heart of Jesus, for the intentions for which He pleads and offers Himself in the Holy Sacrifice of the Mass, in thanksgiving for Your favors, in reparation for my sins, and in humble supplication for my temporal and eternal welfare, for the needs of our holy Mother the Church, for the conversion of sinners, and for the relief of the poor souls in purgatory.